Posted 10. Juni 2012 by Administrator under News 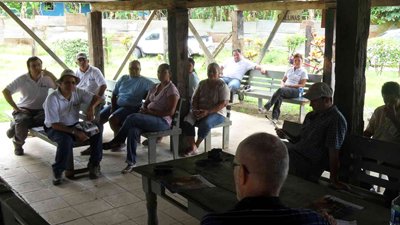 The Global Conservation Standard offers new opportunities for protected areas in Costa Rica. This is the result of a one-day expert workshop in San José.
The German development agency GIZ had invited 30 stakeholders from government, NGOs and the private sector to discuss matters related to nature conservation and development. The experts concluded that the GCS does not conflict with state patrimony, because it does not sell any environmental services the Costa Rican National Forest Finance Fund pays for. GCS Chairman Michael Dutschke had brought a dozen project proposals from a roundtrip across the Central American country, including one from the Sixaola River area at the border with Panama, where he met with a community of landless farmers (see picture). Another proposed project area is the Osa Peninsula, whose 400 square km of protected areas alone host 2.5% of the earth’s biodiversity. The Ministry of the Environment MINAE has taken note of the GCS and is currently studying how to help facilitating GCS‘ work in the country. Meanwhile, the private sector, including fruit companies, tourism operators and a Central American bank have given indications that they want to buy in GCS certified conservation in Costa Rica. Says Dutschke „This is more than we had expected from this first mission“. A national working group has been established that will liaise with state institutions and carry the project proposals forward. Michael Schlönvoigt, Director of the Marine Biodiversity Program BIOMARCC declard, GIZ might assist in funding project development once a promising pilot had been identified.